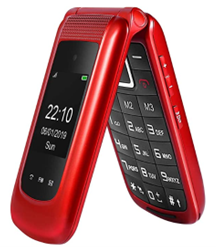 Selecting the best cell phones for senior citizens is just as much of a personal choice as with any other purchase. It starts with deciding the type of phone, looking for a model that fits the allocated budget which has features that meet personal needs.

As a senior looking for a new mobile phone, this exercise can be quite daunting since, let’s face it most seniors do not understand the technical “lingo” that get thrown at them.

This causes a lot of the overwhelm they experience. There are however some key questions and criteria that can guide in this important exercise to help make well-thought-out decisions.

There are still notable differences in the use of technology between U.S. adults under 30 and those 65 and older. Many baby boomers and older seniors shy away from technology like the plague because they find it too confusing.

However, adoption of key technologies by adults in the older age group has grown sharply over the last decade. The gap between both age groups has also narrowed according to analysis of a Pew Center survey conducted in 2021 and published in 2022 by Faverio, M – Share of those 65 and older who are tech users has grown in the past decade.

Differences Between A Cellphone And A Smartphone

Having decided on the type of phone desired, you will very quickly find that service and plan options vary. Typically, cellphones are provided as part of a prepaid (or pay as you go) plan where you purchase calling time or data usage in blocks that are used and then replaced This is better suited to the elderly and some more independent seniors may find this system less convenient than more common smartphone monthly plans.

At the very onset, decide on the following as this will narrow down your search considerably:

1. Do you want a basic phone mainly for talking or do you want the advanced functionality of a smartphone? This is your most critical question. If all you need is a phone to be able to communicate with family and friends, then your best option will be a simple basic phone.

2. If you feel that you need a more expensive phone with advanced features, then carefully think of the reasons to justify why this would be your preferred option instead of the more affordable alternative.

While the idea of having the newest and most powerful smartphone with all the latest features (many which you will probably never use) might be enticing, the best cell phones for seniors should fall within the range of their modest budgets.

The common components found on all mobile phones (Wikipedia) are:

Important Questions To Think About

1. Aging can cause reduced dexterity and dimming vision and this can make traditional keypads on many smartphones harder to use.

Cell phones with larger buttons for easier typing or a black-and-white display to boost contrast and readability are more suitable options. These features can be found in flip phones making them easier to use

2. Changes in vision due to aging require the use of phones that can reduce eye strain. This can be done with a smartphone with a larger screen or an add-on magnifying device.

The other alternative as already discussed, is a black-and-white display to enhance contrast – a feature of flip phones

3. Duration of battery charge is an important feature to consider. A phone that holds a long battery charge of at least a full day — morning to night will prevent worries of loss of connectivity during the day.

1. Voice activation: Many smart phones can do a lot of things without a touch to the keyboard due to voice-activated features.

Seniors that desire to use voice controls should make sure that whichever phone they select has voice dialing and voice texting as well as text-to-speech. This function will enable the phone to read messages out loud.

2. Multiple apps, many of them which are free can act as amplifiers for sound, helping seniors clearly listen to and hear conversations with others.

Sound Amplifier for Android and HearYouNow for iPhone are two examples of free apps that offer help for those who may have difficulty hearing when using a device.

3. Some phones are also compatible with certain hearing aids. Check the model compatibility before making a cell phone purchase.

4. Mini tablets with their enhanced features make them a great option as a cell phone for seniors.

The larger screen offers a way for seniors to get around any visual challenges and gives them a bigger keyboard too.

2. Accessories vary depending on the phone brand, style and model. A sturdy cell phone case is important in case the phone accidentally gets dropped. In addition, cases with a more tactile finish are much easier for older fingers to hold

3. Finding the Right Carrier is critical because cell phone companies can be just as confusing as the phones they offer. They each have different plans, work with different phone manufacturers and have different levels of coverage and service.

They also require that you decide if you are willing to pay as you go with a smartphone, or if you want to be locked into a contract.

In many cases having a contract can save you some money, but it means remaining with that cell phone company for 2-3 years at a minimum.

If you choose the wrong company or plan and sign a contract, then you are stuck and can only get out of the contract with a huge monetary penalty, so there is a need to be careful

To find the right cell phone company, check out which company has the best coverage where you reside. Having a great smartphone is not helpful if you cannot connect to the Web or are constantly being cut off calls.

Final Thoughts on The Best Cell Phones for Senior Citizens

Because there is so much competition in the marketplace finding the best cell phones for senior citizens has become easier once you understand some technical jargon.

This makes the decision-making process easier as more affordable cell phones are available on the market because manufacturers and carriers are all trying to entice customers to sign up with them. Do not be rushed into making a decision

To comply with Federal Trade Commission (FTC) Regulations, note that as an Amazon Associate and other Merchants Associate, I earn from qualifying purchases on this site