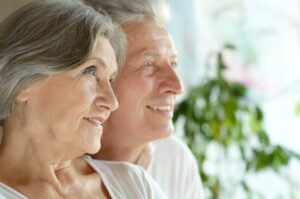 Innovative assistive technologies such as cell phones for seniors with dementia help decrease the burden of care and increase the independence of affected seniors.

This is particularly helpful because people with dementia progressively lose their independence and autonomy, causing a sharp increase in the care they need.

Is There a Difference Between Dementia and Alzheimer’s Disease?

According to the World Health Organization (2017), as the world’s population rapidly increases, the number of seniors and elderly with cognitive impairment will also increase.

The current global population of 47 million people experiencing dementia is projected to triple by 2050.

Dementia is not a specific disease but a general term for cognitive decline that causes an impaired ability to remember, think, or make decisions that interferes with daily activities.

It is an umbrella term encompassing many diagnoses, including Alzheimer’s disease, which is the most common dementia condition.

Though dementia mainly affects older adults, it is not a part of normal aging (CDC 2022)

People with dementia experience not only cognitive, but psychological changes.

While they can benefit from support for more complex tasks in the early stages, as the disease progresses, people become fully dependent on others to complete even basic activities of daily living (PubMed 2017).

The disease can impact a person’s problem-solving skills, capacity for keeping up with routine tasks like paying bills and ability to remember where they put their wallet or phone. People with dementia are also more susceptible to phone scams.

Many older adults who struggle with memory issues often find cell phones hard to use, and it is not uncommon for them to refuse to use them. however, cell phones can help them remember the date, time, phone numbers of family members, and other important information.

Many forms of dementia initially affect short-term memory, while the onset of long-term memory loss shows up much later. For older adults who live alone, a cell phone can be an essential part of their ability to communicate.

A reliable cell phone helps alleviate communication barriers, giving them an easy way to keep in touch with family, friends, and health professionals.

Cell phones for seniors with dementia have the following basic features – large buttons, bright screens, powerful speakers and some form of emergency assistance.

Unique Phone Problems Faced by the Elderly with Dementia

Seniors and the elderly with dementia encounter two unique problems when they try to navigate the functions of an average cell phone many of which are not user-friendly enough for this condition. These are loss of the phone, and forgetting phone numbers.

The stage of dementia and the accompanying behaviors should guide the choice of a cell phone.

Someone with mild cognitive impairment may be able to manage a smartphone relatively easily, while another person with middle-stage Alzheimer’s disease might have difficulty.

Seniors with dementia can become highly agitated or stressed when they either misplace or lose a phone due to forgetfulness. Pouches or cell phone cases that can be worn around the neck like a lanyard may help them keep track of their phones.

This is a common trait of dementia. Phones for people with dementia typically allow programming only with important numbers. These are for the numbers of their children and emergency services. These phones also pairing photos with contact cards and internet functions can be disabled.

How to Choose the Best Cell Phones for Seniors with Dementia

There are general and safety features to consider when looking for the best option for seniors with dementia.

1. Simple, Easy to Use Functions

Simplicity of ease of accessibility of functions is a top criterion. Calling and text messages are usually the most important functions for seniors with dementia, so ensuring simplicity of these tasks is paramount.

Furthermore, having simple volume control and an on/off button are also helpful. Some phone models even go a step further and have the home screen always in the on mode.

This ensures that the phone never locks or falls asleep because it is always ready to use. Such phones also do not require a pass code,

2. Easy to Read Screen with Big Buttons and Numbers

Cell phones with big buttons and easy-to-read, large numbers are usually the best cell phones for seniors with dementia. This is because some older adults may have difficulty with the swipe function.

Being able to readily navigate the phone provides these seniors with a sense of independence.

Phones with Siri or Google voice activation software can make calling easier, as well as help the user set helpful reminders and make notes for later.

The phone being considered should have a long-lasting battery life. This is especially important for seniors with dementia where the user may forget to charge the phone.

Even If the user misplaces it or forgets to recharge the phone, the long battery life will ensure that the phone can remain functional for a longer period of time.

An SOS or emergency function is very helpful—not only if the user gets lost, but also in the event of an emergency like a fall or a fire. This function can eliminate the need for multiple safety devices, giving seniors fewer items to keep track of at any given time.

“Do Not Disturb” mode is a safety feature that can be used to allow only certain people to contact the user, which can reduce the risk of scammer phone calls, or telemarketers. This feature limits incoming calls to only trusted contact in the directory. .

Patients with dementia who are tech savvy and can navigate apps can use the camera to take photos to help remind them of things (addresses, names, and addresses), make lists (things to do or buy) and refer to a calendar when necessary. Such tools can help a senior with dementia retain some autonomy.

Mobile technologies can partially compensate for decreased function owing to dementia. Cell phones for seniors with dementia help decrease the burden of care and increase their independence.

Mobile Phones for Hearing Impaired. How to Select

CDC (2022) What is Dementia? https://www.cdc.gov/aging/dementia/index.html

To comply with Federal Trade Commission (FTC) Regulations, note that as an Amazon Associate and other Merchants Associate, I earn from qualifying purchases on this site from them and this does not affect your cost