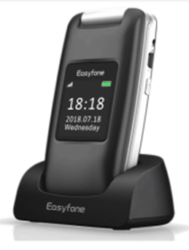 You are online checking for the best cell phones for seniors, but you find out that searching is not as easy as you thought it would be, let alone comparing them. The reason is not far fetched.

There is a mountain of information available and a huge variety of models to review and choose from – depending on where you look.

Aside from checking for phones with functions that meet your needs, online customer reviews are a goldmine of information.

This article removes your frustration and confusion by only focusing on top-rated cell phones and the reviewed reasons for their popularity – along with their features of course!

The aim is to not bog you down with all the specifications which are littered online, but rather those specs that you can compare across the board and make an informed decision.

Note that manufacturers do not all provide uniform information on phone features and specifications. The functionality and specs of the highest rated phones are reflected in their prices, but there are other moderately priced options to choose from.

Not all top rated phones are hearing aid compatible so only those that meet this specification are highlighted.

What is The Difference Between an Unlocked and Locked Cell Phone?

Let’s start off by understanding the difference between an “Unlocked” vs “Locked” cell phone as you will frequently encounter these terms as you research for cell phones for seniors.

An Unlocked cell phone is one which……Factory Unlocked Cell Phones are compatible with most GSM carriers.

These phones are a favorite among younger or tech savvy seniors and make great gifts for parents or grandparents as they can be used anywhere across the globe.

Each generation of wireless cellular technology has introduced increased bandwidth speeds and network capacity. 4G users get speeds of up to 100 Mbps, while 3G only promised a peak speed of 14 Mbps.

This means that websites load faster, you can watch You Tube videos and download files with ease and shows and music is free of buffering.

Wireless carriers use gigabytes to describe the data transferred between their network and your cell phone. As music and video streaming has become more popular, wireless carriers have begun to include more cellular data with their plans.

The Best Cell Phones for Seniors – What is RAM?

RAM (Random Access Memory) is short-term digital storage. Computers and phones use RAM mainly to hold data that active applications (along with the CPU and operating system) are using. This is because RAM is very fast when it comes to reading and writing

This simple phone for the elderly and kids  has big buttons, a large screen with a charging dock. It is designed for Talk & Text Only. There is NO INTERNET, GPS, OR ACCESS TO THE APP STORE. It is Hearing Aid Compatible, and Certified Safe FCC

This is an easy-to-use basic mobile phone with emergency SOS button, hearing aid compatibility and a charging dock. No internet browser

This easy-to-use basic cell phone comes  with a charging dock,  has big buttons, emergency SOS button with GPS,  and is hearing aid compatible. Tested to comply with FCC and IC Standards with Certification.

Has a high functioning camera and numerous additional features, but this phone is only suitable for seniors that are tech savvy.

The phone is not suitable for the more elderly or seniors who have medical conditions that can affect their operation of the phone.

Some reasons for the popularity of the phone

Fingerprint reader on the screen is not as good as the button cell phones a few years ago. One user complained that it failed to recognize them 1 out of 3 times.

However, the phone can be easily unlocked using the front camera with the user’s face. Just by placing the phone near the face, the phone recognizes that it wants to be used  and it unlocks without the user pressing a button

Top rated cell phones for seniors are compared in a format that provides similar criteria so that you can compare “apples to apples”.

This is a format that most seniors, their children and caregivers prefer as it makes decision making so much easier and less confusing.

If you enjoyed reading this article and found value, please leave a comment with your thoughts.

Mobile Phones for the Hearing Impaired. How to Select

Lynch, David 2021 What Is A GB? The Real Definition Of A Gigabyte! https://www.upphone.com/learn/glossary/cellular/what-is-a-gb-real-definition-of-gigabyte/

Hildenbrand, Jerry 2022. How much RAM does your Android phone actually need in 2022? https://www.androidcentral.com/ram-what-it-how-its-used-and-why-you-shouldnt-care

To comply with Federal Trade Commission (FTC) Regulations, note that as an Amazon Associate and other Merchants Associate, I earn from qualifying purchases on this site from them and this does not affect your cost